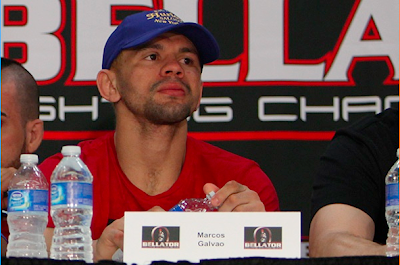 
Bellator Fighting Championships on Tuesday announced the signing of Brazilian bantamweight Marcos Galvao to a long-term deal. Though specifics of the contract were not revealed, the promotion stated that Galvao will take part in Bellator’s upcoming fifth-season bantamweight tournament. The Nova União fighter joins reigning Bellator featherweight king Joe Warren and countryman Luis Alberto Nogueira in the tournament field.

Galvao burst onto the Bellator scene in April when he went the distance with Warren in a 137-pound catchweight affair at Bellator 41. Though Warren walked away with a razor-thin unanimous decision that night, Galvao is hoping for a rematch within the confines of the tournament.

“I definitely don’t believe I lost my fight with Joe Warren. I want a rematch just in case there was doubt in the first fight. I’ll clear up those doubts the second time around,” Galvao stated in a release. “I’m extremely excited to show the world that I can compete and win at this top level here with Bellator. Fans were able to see what I brought to the table the first time around against Joe Warren, and there’s a lot more where that came from.”

An eight-year pro, the Brazilian jiu-jitsu black belt is a two-time veteran of the WEC, suffering knockout losses to both Brian Bowles and Damacio Page during his stint in the little blue cage. Prior to his contentious defeat at the hands of Warren, Galvao had won three straight, culminating with “Louro” winning the Ring of Combat featherweight title in December.

As with all of Bellator’s tournaments, the winner of the Season 5 bantamweight draw will receive $100,000 in total pay and a shot at divisional king Zach Makovsky.
Posted by Vitor "shaolin" Ribiero at 6:47 AM