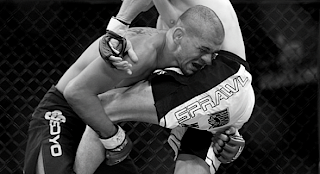 It took Loro the whole three rounds to overcome Jacob Kirwan, the unanimous decision his second win in a row.

The result brought Galvão’s win tally to eight, with three losses and one draw.

In attendance at the event were Ricardo Cachorrão and Frankie Edgar, among other big names from the MMA world.
Posted by Vitor "shaolin" Ribiero at 9:53 PM